Graduating from the London College of Fashion in 2018, Steven PASSARO has quickly entered the list of young designers to follow very closely. Present for three seasons at Paris Fashion Week, his collections are influenced by English tailoring and a futuristic vision of men’s fashion. Steven opened the doors of his studio for a special interview with our Design Business Unit Director, Alexandra BUOR.

Alexandra: Hello Steven, thank you for having us in your Parisian studio for this interview. Can you tell us a little about your brand?

Steven: I created my eponymous brand, Steven PASSARO two years ago in Paris. It is based on a unique know-how that combines 3D and traditional tailoring. The first launch was in September 2020, after which things developed rapidly. I’m now present at Paris Fashion Week for three seasons. I work in an incubated studio in Paris, and I have good media coverage.

Alexandra: Steven, you’re one of the precursors with the use of 3D. Can you tell us how long you have been using it and how you started? Steven: I’ve been using 3D, and especially Clo3D since the beginning. I discovered the software during my studies in London. I became interested in 3D because I wanted to discover a different way of working than the traditional way. When I came back to Paris, my ambition was to learn how to use Lectra. In the end, the training courses were cancelled and when I realized how complex the software was as a designer, I told myself that it wasn’t for me.

Luckily, a friend had taken a quick course on Clo3D and offered to give me a demo to introduce me to the tool. I was immediately hooked. I continued to learn intensively on my own to master and understand all the different 2D and 3D aspects, manage document exports, play with gradations etc. Since then, it has become omnipresent in all our product development.

Alexandra: Was the adoption of 3D obvious to you?

Steven: Logical and radical! The main goal for me was really to reduce waste and the use of raw materials, namely canvas bases and prototypes. I wanted to do as many things as possible digitally to limit my consumption of raw materials.

Alexandra: And precisely, except for avoiding making a lot of physical prototypes, what advantages could you identify with the use of 3D?

Steven: Considerable time savings! In terms of product development, I divided my time by three. For example, to make a jacket by hand, it used to take me about 3 to 4 days. Now I spend about a day to have a first version of the digital prototype assembled. For modifications and adjustments, I spend about half a day more.

Alexandra: So, then you’ll outsource your pattern to create your final prototype?

Steven: So, we make the prototype in-house of the finished product, and then we outsource the grading and production to save time and money.

Alexandra: Do you personally feel any frustrations with using these technologies? Are there things that slow you down?

Steven: Yes, there are inevitably some frustrations.

On Clo3D we sometimes encounter small problems of gradation or in the editing of angles for example. And it should be noted that in terms of creation, we are really on flat cutting, and not on molding.

But the frustration is rather technical for me, especially when converting the files. The compatibility between the files and the systems isn’t optimum, so we can quickly be confronted with loss of information, which isn’t ideal.

Alexandra: More generally, what do you think are the obstacles to the adoption of this technology in the fashion industry?

Steven: I can identify several obstacles. For fashion houses, for example, the anchoring of knowledge around traditional know-how is far too strong, we have difficulty opening up to these new ways of creating, we wonder why we should learn a new way of doing things when traditional methods meet our needs. We often associate the adoption of 3D with the loss of know-how. There’s a kind of fear around innovation.

There’s also a generational issue. With decades of experience and practice on machines that you have mastered perfectly, it’s difficult to question everything and “relearn” your trade on an unknown tool, especially for generations that didn’t grow up with digital.

However, when you start to take a closer look at 3D and show curiosity, the time savings and accessibility are obvious.

In some of the larger houses, I think it’s very much related to the social structure. It’s so compartmentalized, structured in an archaic, hierarchical way. To implement this software in a house, it can take a long time! You have to go through countless tests, which have to be validated by test groups, which are themselves validated by other departments, etc. So, of course, the question of saving time is quickly called into question in these conditions.

And finally, I think that many people are lost and simply don’t know where to start.

Alexandra: In fashion houses, we often find this hierarchical model with the stylist at the top of the pyramid, then marketing, development, then production, etc… Doesn’t 3D finally short-circuit this hierarchy and establish more linearity?

Steven: For sure, if 3D is implemented at the “bottom” of the pyramid, there will be much more fluidity and linearity. The model maker, the designer and the DA can all work on a product at the same time. Moreover, there are many products for which we will not need to make the real physical prototype to get the go / no go. This avoids the X number of prototypes and canvases that will be thrown away as soon as possible. I assume that if it doesn’t work in 3D, it won’t work in real life either. 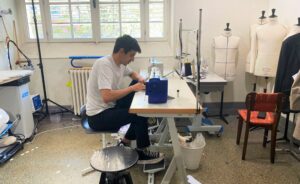 Alexandra: Don’t we find ourselves facing a little war of ego on the part of the stylists too?

Steven: I think that many stylists don’t understand the technical part of their job. As soon as they are trained, they are told that they will have a kind of power and a certain notoriety, that if they lack the technique, they can always delegate. There’s a kind of deficiency on these subjects in the training, maintained by the schools and by the management of some houses. Except that it becomes a real problem when you want to use 3D.

Alexandra: So, for you, we need to review the training and the curriculum, to “reformat” the profession of the stylist in a way?

Alexandra: Does 3D bring you the same creativity as you could have on a sheet of paper?

Steven: It’s quite different. I haven’t given up on paper though, 3D doesn’t replace drawing, or even anything we have today, it’s just another tool. I alternate their use. When I see that some things are going to be too complex with the 3D software, I draw by hand. The goal is to save time and to be able to express my creativity, so I use the tool that best suits my needs. The two are complementary.

Alexandra: At the end, it’s mostly an additional gateway to expand your creativity as a designer?

Steven: It definitely frees up your creativity in a way. We can afford to do tests that we wouldn’t necessarily have had time to do in real life or that would have required too much fabric or raw materials. Here we can do the tests in 3D. If it works, we can test it in real life, if it doesn’t work, we forget it. Beyond the time saving, we don’t spend a cent to do the tests, so it’s really interesting.

Besides, inspiration can come from where you don’t expect it: from a software bug or from an uncontrolled manipulation! It happened to me once for one of my silhouettes. While working on the fabric in the software, I found a volume that I had not necessarily sought, and I realized that it worked great. So, I applied it to my physical prototype, and it looked great!

Alexandra: How far do you want to go with 3D?

Steven: I really like experimenting with 3D tools and I would like to go even further with augmented reality for example. It’s true that lately it’s lost a bit of its meaning because everyone wants to see the physical, the real, the touch, but I find that the opportunities with 3D are huge, and I want to explore them!

For example, I would like to experiment more with 3D knitting: you can model everything with the stitches and create the program for the supplier in the background. I would love to work on this type of project.

Also, to refine the 3D renderings for even more precision and realism. And why not eventually work in augmented reality, with a headset, where you can actually drape the fabric directly into the software. But well, there is still a long way to go before we get there (laughs)! In any case, it would be interesting to experiment if one day it is viable.

Alexandra: Do you have any other projects related to 3D in addition to developing your brand?

Steven: What’s great is that many schools are becoming aware of the importance of 3D in their courses, so it’s an opportunity for me. I teach courses at the Mod’art school to teach Clo3D, Art Direction with 3D, and a course on “How to create your brand with 3D?“.

Alexandra: Do you consider that 3D will be a mandatory skill in the next 5 years, for example?

Steven: It’s quite funny because all the new jobs I can see popping up on LinkedIn mention 3D. You see a lot of “desired/recommended: know how to create with 3D” or “having skills on Clo3D is a plus”. It’s still not mandatory in most cases, but it shows that brands are thinking about the subject.

Alexandra: Today, you work with a 3D software to create your silhouettes and models. But have you ever considered or do you plan to use it differently? With the creation of 100% virtual collections, for example, or to promote the sale of your products…?

Steven: I already worked with a friend in London on a collection, for which the pieces were bought before we even made the prototypes. And for last winter’s collection, I was able to work in collaboration on a technology that allows to map the 3D garment on a 2D photo, it allows seeing the rendering on a mannequin without fitting, it was very realistic. On the other hand, I don’t believe at all in the 3D collection, NFT, metaverse etc. I think that if you want to buy a collector’s item worth several hundred euros, you don’t buy it digitally. You go to a store, you try it on, and you buy a piece of clothing that you can wear and show. The real thing has too much room, especially post COVID.

Alexandra: Do you have a message for all designers or future designers about 3D?

Alexandra: And do you want to add anything in relation to your brand, to you or to 3D?

Steven: I am glad that 3D is omnipresent in my brand’s DNA. It’s what got me to where I am today. I’m very proud to be one of the first figures who has exploited it so much and used it to build his brand.

These articles may interest you

The Fit Retail team is at your service

You plan a project